The Big Ten Academic Alliance is delighted to announce that Katherine Galvin has been appointed as the Director of Programs, effective January 3, 2017. 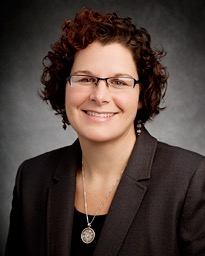 The Big Ten Academic Alliance is delighted to announce that Katherine Galvin has been appointed as the Director of Programs, effective January 3, 2017. Katherine's role includes leading a dynamic team of professionals in support of programs such as the fiber-optic network linking member campuses; the acclaimed Academic Leadership Program; and large-scale research collaborations in traumatic brain injury and health equity. In addition, Katherine will work with leaders at the highest levels of Big Ten universities including Deans, Vice Presidents, Chief Information Officers, and other senior officers.

Katherine comes to us from the University of Illinois at Urbana-Champaign, where she has served in the Chancellor’s Office, Provost’s Office, and Office of University Counsel. Katherine's current duties as an Associate Chancellor include providing oversight and guidance to a number of administrative units and acting as the liaison to the Board of Trustees and the Academic Senate. Prior to joining the Chancellor’s Office, she was in the Provost’s Office for six years, first as an Assistant Provost and then as the Associate Provost for Administrative Affairs. Previously serving as a Senior Assistant Attorney General for the State of Michigan and as an Assistant Attorney General for the State of North Carolina, Katherine began her career at Illinois in 2007 as an Associate University Counsel. Katherine has a J.D. from the University of Michigan Law School and a B.A. in Philosophy from Michigan State University.